Only until the 2020 election! Click here to view our recommended candidates. 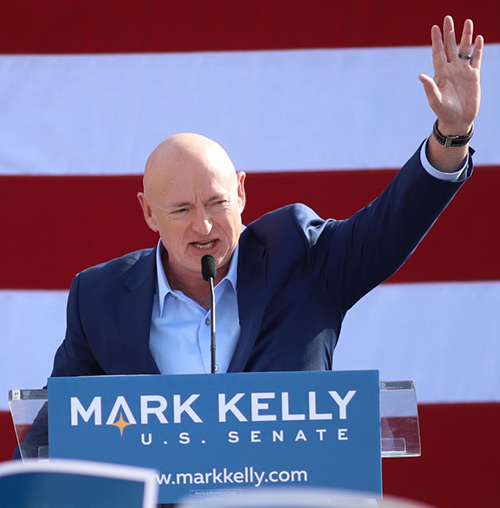 While the Trump administration disparages the expertise of our nation’s best doctors, public health experts, and scientists on a daily basis, Mark Kelly knows that making decisions based on scientific fact isn’t just smart: it’s a moral imperative, because it saves lives.

In a sense, Mark Kelly has trained for public office his whole life, repeatedly facing challenges most of us can’t even imagine. He learned to remain clear-headed in the most extreme conditions -- including outside of Earth’s atmosphere -- and to rely on a combination of teamwork, independent thinking, and facts to make the right decisions. He served as a naval aviator in the Gulf War, reaching the rank of Captain before training as an astronaut and leading four space missions. After his wife, former Rep. Gabrielle Giffords, survived a near-fatal gunshot wound in an assassination attempt, they teamed up to become leading advocates in the national push for commonsense gun safety legislation. With persistence and the power of hard fact, Mark Kelly fights on.

Among these facts is that of climate change. Mark Kelly knows that climate change is a threat that Arizona can’t afford to ignore. Without swift action, large portions of a state will be unlivable within 30 years due to extreme heat. But that’s just the beginning: wildfires and droughts are predicted to cause even more challenges. Arizona can’t afford to wait for lawmakers like Republican incumbent Martha McSally, who currently occupies a place on the League of Conservation Voters’ “Dirty Dozen,” a list of the political candidates with the worst records on the environment. Unlike McSally, Mark Kelly knows that keeping Arizona livable for future generations will require swift, science-based action to halt climate change. He sees this as an opportunity: to capitalize on Arizona’s natural advantages in wind, solar, and other alternative energy; to invest in research and development that will put the U.S. at the forefront of clean power technology; and to create high-paying jobs for Arizonan workers.

Mark Kelly will fight to ensure that every Arizonan and American has access to quality healthcare. He knows how important access to good medical care is, because it saved his wife’s life. But it’s lamentably scarce in Arizona, which has the 3rd highest uninsured rate in the country. Kelly will prioritize making healthcare affordable and accessible -- including for Arizona’s 2.8 million residents with pre-existing conditions -- by advocating for a public option to compete with private insurance and advocating for more transparency in medical billing. He’s also refusing donations from corporate PACs, so he’ll have no problem taking on Big Pharma to secure more affordable prescription drugs for Americans. He’ll advocate for science-based solutions to the coronavirus pandemic, protect a woman’s right to choose what is right for her own body, and bring his fierce longtime advocacy for gun reform to the Senate.

Kelly has vowed to defend and strengthen not just healthcare, but all the essential services that Americans rely on, including Medicare, Social Security, and public education. Himself the product of public schools, Kelly supports raising teacher salaries, increasing access to early childhood education, and improving school funding so that a quality education is truly guaranteed for all. He pledged to support job training and apprenticeship programs, as well as lowering interest rates on federal student loans so that getting an education doesn’t mean a lifetime of debt. And as a veteran, he knows the sacrifice that our servicepeople make for this country and will fight relentlessly to ensure that they receive the support they deserve, including job training to help transfer their military skills to the workforce, access to mental health services, and more accountability at the VA. Arizonans, and all Americans, deserve to have an advocate like Mark Kelly fighting for them.

There can be no doubt that our country is experiencing a crisis of leadership. It’s time for a new approach, for working with scientific experts to find fact-based solutions to urgent problems; for sound, deliberate decision-making in the face of immense pressure; and for independent thinking that prioritizes the needs of the American people over money, influence, and partisan politics. We at Flip the West believe that Mark Kelly is the antidote to the anti-science, misinformation-spewing “leadership” we have now, and we need your help to make sure it’s people like him that will shepherd our country into a new era.

How We Can Win

It starts with you. Together, we can restore the promise of America and start to reverse the damage done by Trump and his Republican enablers in the House and Senate. Together, we prevent a far right wing takeover of the U.S. Supreme Court. Together, we win.